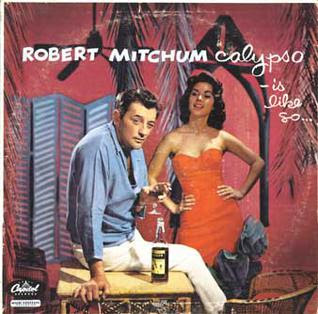 Surprised that Robert Mitchum sings Calypso? It would be stranger if he couldn't. Fact is, he was learning the fascinating language of Calypso long before it became the rage in the U.S.A. And he was learning it in its true home, Trinidad.

Deep down, Robert Mitchum is a wanderer, and he probably would have got to Trinidad anyway, but actually it was Hollywood that sent him there, "on location" for two feature films... to Port of Spain, a colorful and sunlit place where people have come from many corners of the earth, mingling accents and spilling out their hearts in a unique musical idiom called Calypso.

In Trinidad, the sharp Mitchum ear was quick to hear the subtle coloration of word and melody that gives this native song its special sound. And, expert mimic that he is, he was quick to give it voice, in every characteristic detail.

For ten months of the kind he likes best, Mitchum followed his Calypso trail, listening acutely to local champions like Lord Melody and Mighty Sparrow, memorizing newer and more intricate lyrics in some small native bistro, absorbing the rhythmic excitement of such festivities as the great annual Jump Up Carnival.

Returning to the States, he was happy enough merely to spread the gospel of the Calypso style among the entertainment fraternity. But show-wise listeners soon recognized the quality of the Mitchum demonstrations, and insisted Bob record the songs himself.

The result: this album.

Not all the songs he sings here are absolutely as he first heard them (the censor wouldn't stand for it). A couple of the tunes are already well known; a couple are even newly written for the occasion. But every one has the authentic flavor, the beat and the vitality of the real Caribbean thing. All are products of great talent and great enthusiasm. Calypso, Robert Mitchum says with considerable authority, is like so...
Birt af Björninn kl. 11:37